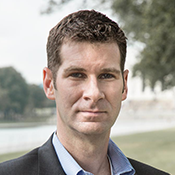 Military force is powered by software.

The drones that are used to kill suspected terrorists can identify those terrorists using the same computer vision tools that are used to identify who is in an Instagram picture. Nuclear facilities in Iran were physically disabled by the military-sponsored Stuxnet virus. National intelligence data is collected and processed using the MapReduce algorithm.

The military keeps up with technology more effectively than lawmakers. It is common to read a quote from a senator or a judge that shows a basic misunderstanding of cybersecurity. Many politicians do not even use email.

There is a large and growing knowledge gap between military capability and the technological savvy of policymakers. On the whole, government is not prepared for modern warfare.

We are lucky that military conflict in 2017 is decentralized.

There are small skirmishes in the Middle East, but there is nothing compared to the centralized hostility of World War II. The bonds of international trade form some protection against a war between major powers like US and China.

But it is easy to imagine circumstances that could lead global war. There is an arms race between the United States and China—and this arms race is happening in an environment of increasing informational chaos.
This informational chaos stretches from the highest levels of government to the least informed of our citizenry.

Online journalism is becoming physically dangerous. Journalists are being tracked and threatened. Locations where journalists live have been published by enemies of those journalists. And this war on journalists has a chilling effect on the production of truthful information.

Social media creates a fog of war around information.

There is also a fog of war around real world physical conflict that is enacted remotely through computers. This type of confusion is the problem known as cybersecurity attribution.

When a power grid gets knocked offline by a hacker, how do we know who was responsible? When a drone flies through New York City shooting at people, how do we know who deployed that drone? When self-driving car technology becomes open source, how long will it be before we see a 9/11-type event performed remotely with cars instead of an airplane—and when it does happen, how will we respond?

Imagine the level of grief and anger on 9/11 that caused our government to launch a war on Iraq. Whether or not you supported that war, we were at least (sort of) aiming in the right direction of the geographic location where the attackers came from.

What would we do if could not figure out who launched such an attack?

When cyber forensics teams look into a problem, it might appear that an attack came from China at one layer, Russia from another layer, and some domestic attacker at another layer. It can be time consuming to uncover the truth behind a cyberattack.

Just like in social media information wars, the instigators of conflict have an advantage.

And the ability to instigate such a conflict is democratized. Social media, open source software, and cloud computing give a technologist superpowers. Cryptocurrencies can anonymize the financial transactions to pay for such tools, and basic encryption can anonymize the terroristic acts that occur over a remote internet connection.

Peter Warren Singer is a political scientist who formerly worked in the United States advisory committee on International Communications and Information Policy. He is also an author, whose books include Wired for War, Cybersecurity and Cyberwar: What Everyone Needs to Know, and Ghost Fleet: A Novel of the Next World War. Peter writes about the circumstances that could lead to global warfare, and how military actors might behave in a third world war.

In this episode, Peter shares a dark, but realistic vision that we should all hope to avoid.

If you like this episode, we have done many other shows on related topics–including drones, IoT security, and automotive cybersecurity. To find these old episodes, you can download the Software Engineering Daily app for iOS and for Android. In other podcast players, you can only access the most recent 100 episodes. With these apps, we are building a new way to consume content about software engineering. They are open-sourced at github.com/softwareengineeringdaily. If you are looking for an open source project to get involved with, we would love to get your help.

Transcript provided by We Edit Podcasts. Software Engineering Daily listeners can go to weeditpodcasts.com/sed to get 20% off the first two months of audio editing and transcription services. Thanks to We Edit Podcasts for partnering with SE Daily. Please click here to view this show’s transcript.

What does it take to be a Technical Author?

10 Privacy-enhancing Technologies Every Engineer Should Know About